Learned it from my late (100 % Hungarian) grandma.

You don’t want my life story. But you do want to know which kind of meat to use, right? Bear with me.

Gulyásleves is actually more of a soup than a stew. The stew itself is called pörkölt and must consist of beef, onions, paprika, grease, and seasonings and maybe a tomato or two.

The meat for a proper pörkölt is often cheap beef stew meat, the kind you simmer for hours and hours until it becomes nearly chewable. Not grandma. She always used „Nuß“, a part of the “head of the quadriceps” muscle, musculus rectus femoris. It’s labelled „Zapfen“ in the image; just print the pretty picture and tell your butcher you want the part ringed in red. This is what the simmer time of 1.5 hours is calculated for. 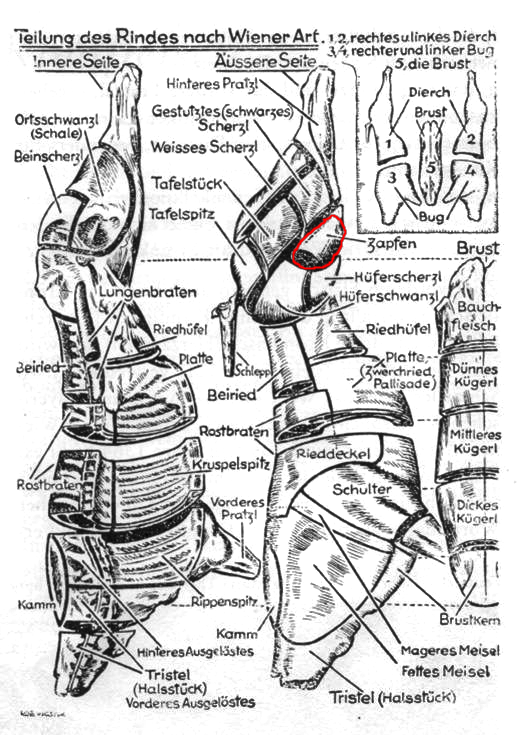 Preparation is easy. Try not to fuck it up:

The above is what is known in Vienna as „Saftgulasch“ (“sauce-goulash”). Its distinguishing characteristic is that the sauce is bound only by the gelatin extracted from the meat during cooking, by the onion solids, and by reducing the stew to the desired consistency.

Traditionally, this dish is served with only dark rye bread on the side, but white bread will work, too, or rice, or Hungarian Tarhonya.

Variations on a common theme

Rindsgulasch, beef goulash. Do not braise the beef in the onions. Instead, while the onions are cooking, cover the meat cubes in flour and sauté them in a separate pan. Then, add them to the onions and continue.

Zigeunergulasch, gypsy goulash. Like Rindsgulasch in that the meat is floured and pan-browned. Uses beef, lamb, or pork, or any mix of these. Later in the cooking, add diced potatoes, diced green bell peppers, and diced tomato (in addition to the tomato you already used).

Karlsbader Gulasch. So named after the spa resort for the rich in the old Austrian monarchy. Prepare a basic goulash; stir some flour into cold water (no clumping, please!), add sour cream generously, stir into the goulash. Serve with Nockerln (Italian potato gnocchi will do in a pinch).

Kaisergulasch, Emperor goulash. Use beef tenderloin and adjust cooking time. Serve with “lard-noodles” („abgeschmalzene Nudeln“): cook egg noodles, like German-style „Spätzle“ or what you find at the Asian grocery, until soft. Meanwhile, finely chop an onion and fry it in lard until transparent, then continue frying until it is yellow. Pour over the pasta and serve. Alternative: instead of lard, render diced bacon and use that to fry the chopped onion. Yum!

Bauerngulasch, peasant’s goulash. Rindsgulasch as above, garnished with small Semmelknödel (I have a recipe for that, too).

Fiakergulasch, coachman’s goulash, Herrengulasch, gentleman’s goulash. Rindsgulasch garnished with a pan-fried egg (traditionally sunny side up), a pan-fried Frankfurter or two, a partially sliced and spread into fan-shape gherkin (cornichon may be substituted). Optional: A couple of slices of Semmelknödel, maybe even pan-fried; otherwise white bread.